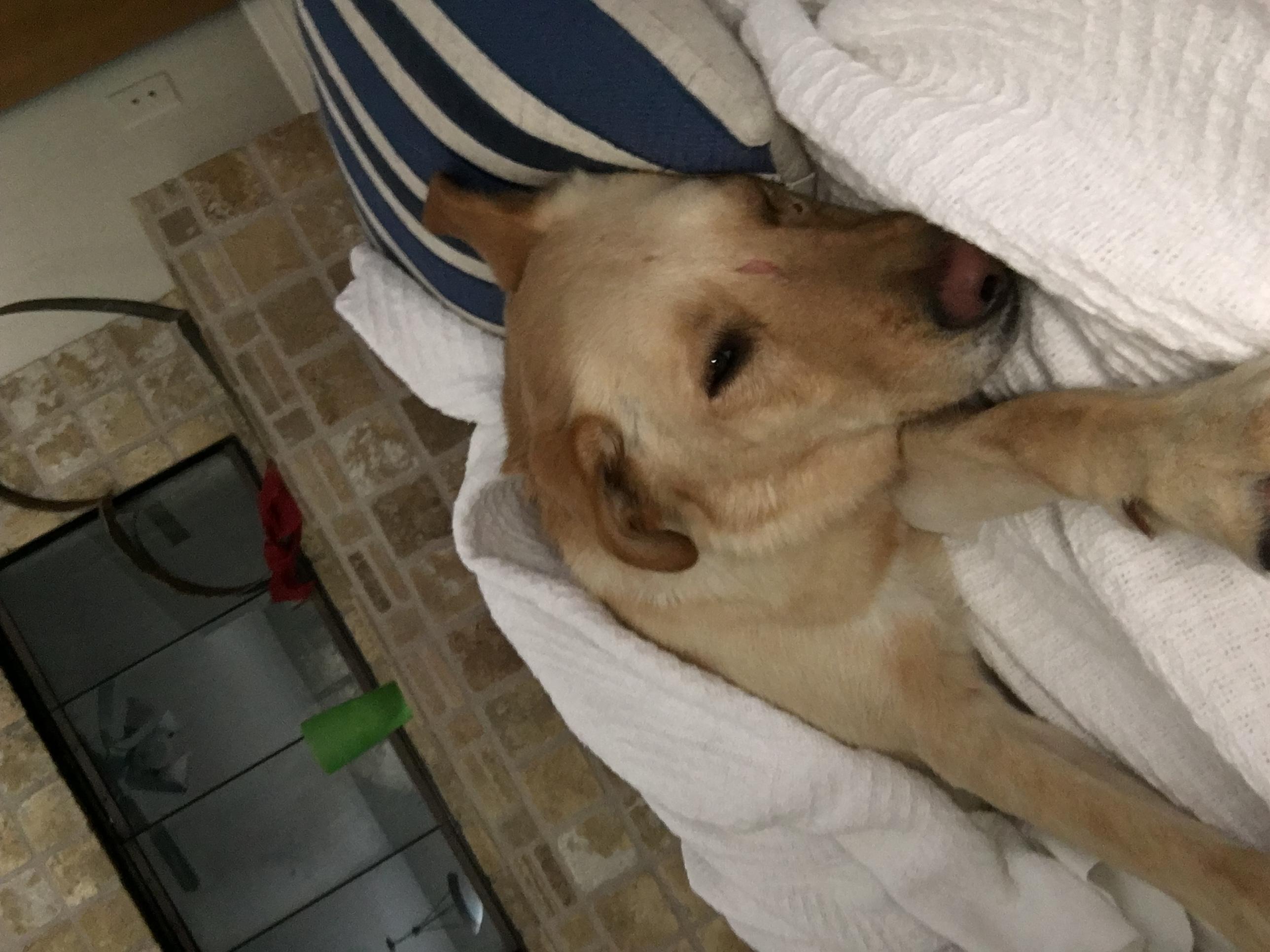 I just wanted to share a story of survival with you. While I was out running an errand on Monday, September 5th my little sister let our dogs outside before she left (she was in a hurry) and let 3 dogs out only only 2 back in and didn't realize it. Of course, the one time our back gate wasn't fully latched and secured my dog, Harper got out. She was out for about an hour before I got home and instantly realized she was missing and went in to full panic mode. A few neighbors had seen her but were unable to get her because she gets a little nervous around people she doesn't know. Between my friends, family, and neighbors we had about 15 people out searching for her for 8 hours. Around 4 P.M. there was a cop that approached one of my friends who was out searching for Harper and asked if he happened to be looking for a yellow lab. He then proceeded to tell him that he was so sorry just saw a yellow lab get hit by a car on Shea, an extremely busy high traffic street. Apparently he couldn't stop right then so he turned around at the next light and by the time he was back where she had been hit there was no sign of her. The cop told us he was almost sure she didn't get up and told us that she was hit really hard by a Tahoe going approximately 50 MPH so he didn't think there was any way she survived it. He thought that someone must of picked her up right then and rushed her to a vet. She was wearing a collar with a tag and is microchipped so as I continued to search for her I was desperately waiting all day to get a call from someone but never did. We were calling every ER and vet office in the area but most of them were closed since it was Labor Day. We continued to search and post flyers the rest of the day with no luck. The next day I woke up with no news. Around 11:45 AM I received a call from a guy saying that he thought he had my dog. I seriously COULDN'T BELIEVE MY EARS. I remember being completely speechless and then falling to my knees bursting out in tears saying "SHES ALIVE?!" I will never forget the moment I pulled up and saw her standing there, I've never been so grateful in my entire life. After being missing for 24 hours, being hit by a car, and surviving through the night it was an absolute miracle. My uncles are both vets so I rushed her to their clinic to be checked out. She walked away with a fractured jaw, about 5 broken teeth, blistered paw pads, road rash on her stomach, and some serious bruising on her back legs. My uncle continued to say "she is one lucky dog." After the worst 24 hours of my life, I could not be more grateful for my happy ending. I received an email later that day from Arizona Animal Welfare Leauge, where I adopted Harper congratulating me on her 3 year rescue-versary. Exactly 3 years ago on that day I brought Harper home with me. Talk about ironic! I am still overwhelmed with the amount of support I received when Harper went missing, especially from people I have never even met. Because someone saw my post on a social media site, they put together an entire search team with the mission of finding Harper. I had strangers emailing me lost posters they made themselves. Someone else saw my post on a lost dog site and drove 40 minutes from Gilbert with his dog and searched for Harper until the sun went down. Those are just a few of the many examples of the overwhelming support I received from people in my community. It was truly AMAZING. My heart is SO full and I am eternally grateful to each and every person who helped bring my baby home! There are so many people out there with such big hearts! Never lose faith, miracles do happen!