By: the Brumbelow's , College Park, GA 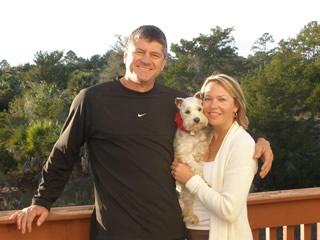 Khloe, our white miniature schnauzer, was stolen from us on November 28th in Tallahassee. We were there visiting for the Thanksgiving holiday and had her in our truck. We stopped to eat and we returned she was gone. We immediately called the police, but there was nothing they could do for us. The next day we passed out thousands of fliers in all the WalMart, Sams Club, grocery stores, Costco and on all trees and lamp posts in a five mile radius.  We then took out ads in the newspaper, got her on the radio and sent out 23,000 postcards to the residents of Tallahassee and had two billboards made up. Still - we never got any real leads.

On April 29th, I received a call from the Fulton County Animal Services department. Khloe had gotten away from the people who had her and she was picked up by Animal Services. They then scanned her and my information came up. What is so unbelievable is that she was found in the same county we live in. The people who stole her must have been traveling for Thanksgiving as well and took her right on home to College Park. She definitely had been through a lot because she was almost unrecognizable. She had several puncture wounds which leads us to believe she was attacked by dogs and I have a feeling that she was also hit by these people because she is very skittish.

With everything that we did to try and find her it was her Avid chip that eventually gave us our baby back. Having her stolen from us was the most devastating experience of my life. I truly did not think we would ever see her again, but thanks to that chip she is home safe and doing great now. It is taking a while to undo 5 months of what those people did to her, but we are definitely making progress.