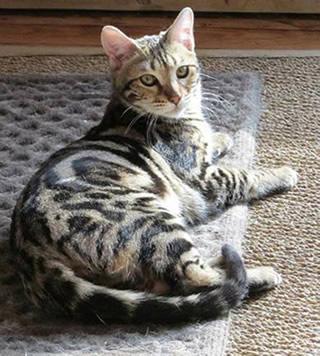 In early July 2013 I left for Hartford, Connecticut for the final two weeks of my grad program. Before leaving, I arranged for a house sitter to come in for the 10 days following my graduation because my husband was meeting me in Hartford so we could drive to Maine and take our first vacation in seven years.

Half-way through our Maine vacation we received a phone call from the house sitter.....where's Bob? Up to this point, our vacation was going well, but we knew Bob was not going to do well on his own. We knew instantly that somehow, Bob had escaped from the house. Thankfully, we had Bob microchipped by our local veterinarian. Bob has always been a very timid cat (when he arrived he was very much unsocialized) and after owning him for a few years he was finally coming out of his shell. Bob was an indoor cat mostly and we suspected Bob was going to have a difficult time on his own.

Despite our attempts to track him down we couldn't find him. There are plenty of predators, roaming dogs and traffic around so we suspected he was gone. Bob's cat friend Steve was a mess; he obviously missed Bob. Steve refused to eat and wasn't interested in even playing with his favorite toys. Knowing Steve was a very social cat we decided after 4 weeks to find Steve a new friend. We adopted a retired Oriental Shorthair show cat. Steve perked up.

Then, on a Thursday morning we received a call from a nearby shelter, after nearly 6 weeks Bob was found almost 9 miles away in Shelbyville! He's a bit thin, but we were so happy to have him home! Steve agrees and so does their new friend Gladys!