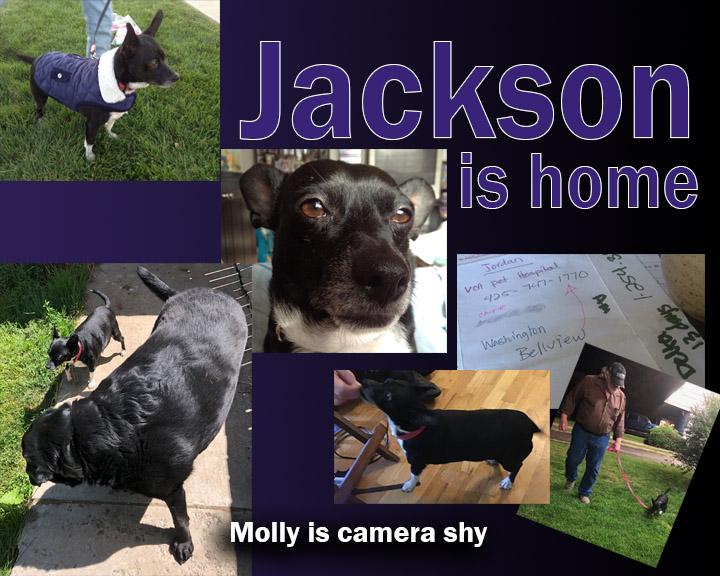 I woke up at 4 a.m. not really knowing why. I noticed that I had missed a call from California. I called the number back and after the first few words I hung up, thinking it had been a robo-call. Then my sleepy mind caught up with what I just heard, “PETtrac pet recovery service”. And I thought I don’t know why a pet . . . unless . . . someone has found Jackson! Jackson was an extreme cuddle buddy. He was a very personable dog. His one flaw was that when he sees any open door, he had an impulse to run. My friend adopted him from a rescue and part of his adoption was the requirement to have him chipped. My friend deployed and my family became his home while she was gone. He got out once from my home so I had my information added to his AvidID microchip. Before my friend returned, I was asked to rehome Jackson, so I did. With my sister’s family. In exchange for Jackson, I got Molly, a 90 lb Labrador. It wasn’t long before Jackson found his opportunity to run. As his new family was tracking him down, they saw someone scoop him up and drive away before they could catch up to them. With some help, we tracked down the family that was trying to take care of this little lost dog. They said they had taken him to the local pet rescue to see if he had a chip but they couldn’t find one. They also said that on an outing, they had opened the door to get out of the car and Jackson jumped out and ran. They searched for him. We searched for him in the location they said he’d disappeared. There was no trace and no one had seen him. By then it had snowed so we feared the worst. My family had never lost a dog before. Four years passed. I waited until the company opened to call the number back again. I told the woman I had missed a call from them but if they were calling me, it was likely someone had found my Chihuahua. After describing him, she gave me the contact information for the VCA Veterinary Hospital in Bellevue, Wa, a little over 800 miles from where he went missing. They confirmed with the recovery service that I was listed on his chip. I worried that he might be hurt because he was at a vet office, but they said he had been found by a jogger and assured me that he seemed happy and healthy. Through a strong deluge of happy tears, we started scrambling to figure out how to get him home. VCA Bellevue gave him a health check and found out he had another chip, a 15-digit chip but it wasn’t registered to anyone. They gave him a clean bill of health and vaccination boosters and were able to pass him to my aunt who would keep him for a few days. We arranged his travel home through Delta Airlines. Despite some delays due to the heat, he made his way to my parent’s house Aug 8. I am a civilian working overseas with the US military. We are scheduled to come home in a few months. I can’t wait to get home so we can be reunited with Jackson, the little dog who thinks he is big, and Molly, the big dog who thinks she is a cat. This is not the way we first thought this would end so I want to thank everyone along the way who helped keep Jackson safe. I want to thank everyone who helped us bring Jackson home. I want to encourage people to micro-chip their pets. When you do, make sure you update the information in the system so when you pet is located, they can always find their way home.